Over the past few posts in this VivaGlobetrotting save we have seen how Ken Sasaki has developed and implemented his own managerial identity at both Coquimbo Unido and Colo-Colo. One of the three main elements of this identity was to focus on youth. This post will look into this aspect in greater detail, detailing how Sasaki has successfully focused on youth at Chilean champions Colo-Colo.

Focusing on youth was a tricky proposition for Ken Sasaki whilst managing Coquimbo Unido. The low level of facilities meant that the standard of youngsters coming into the club were not to the standard needed for the Chilean top-tier. The lack of club reputation also meant that bringing in top-tier quality youngsters was difficult. Nonetheless, Ken Sasaki made a conscious effort to focus on youth through playing youngters where possible and actively looking for younger players to bring to the club.

Brazilian youngster Ze was signed by Sasaki as part of his focus on youth. 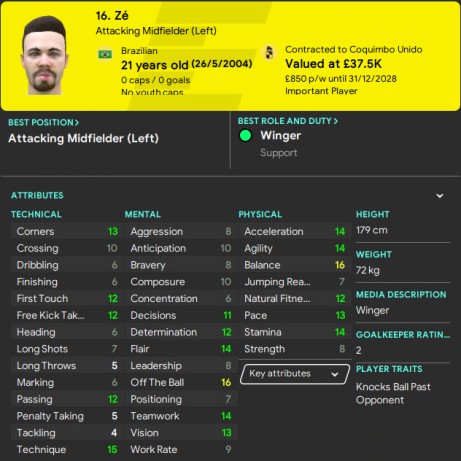 Ze has since become a first-team regular at Coquimbo Unido despite Sasaki’s departure. Sasaki also gave several first-team appearances to Diego Abaceta, a youngster signed on a free transfer from Colo-Colo. Overall, Sasaki made valiant attempts to focus on youth whilst at Coquimbo, but in reality the club level was too low to fully implement this area of Sasaki’s identity.

At Colo-Colo, however, it is a different story. The facilities at the Chilean giants are of a very high standard, meaning that youngsters coming into the club through the youth academy are often potential first-team players.

This means that Sasaki now has the confidence to rely on players coming through the youth setup, moving on older members of the first-team squad to be replaced by these youngsters.

Ken Sasaki is now into his third full season as Colo-Colo boss. In his first two seasons he has implemented an attacking mindset and targetted specific attributes when signing players. The two elements of his managerial identity have been implemented and so it is time for Sasaki to really start to focus on youth. The rest of the post will detail how he has done so.

The youth players that exist in Ken Sasaki’s realm can be categorised into four groups.

The first category of youth player to consider is those youngsters signed as 1st team members. This is an area in which Sasaki has excelled with Colo-Colo, with a good portion of the first team squad consisting of young players signed specifically for the first team.

The above four players were all signed by Ken Sasaki aged 20 or younger and all have had an instant impact in the fortunes of the 1st team.

Marcos Antonio was signed for a fee of just £17.75k from Sport Recife in 2024. Just one year on he is now valued at £325k. Realistically, he is not good enough to oust Nestor Cantero or Vicente Pizarro from the central midfield in the first team and as such he is not a player who Sasaki views as a first-team player in the future. Instead, he is a player who can make the club a hefty profit. 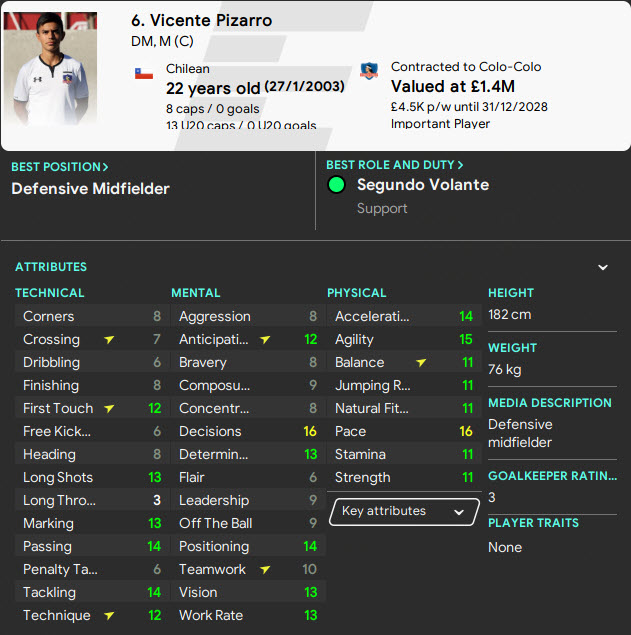 Martin Celedon has only recently entered the first-team as first-choice goalkeeper. Vicente Pizarro has been a regular in the first-team since Sasaki’s arrival.

The majority of players who come through the youth academy have decent potential but they will have to do exceptionally well to reach it and perform well enough to secure a place in the first team. The fourth category of youngster are these youth academy graduates who will not be good enough for the first-team squad but should be given time to develop to then be moved on to other Chilean clubs.

The above two players, Leonel Villegas and Mauricio Lopez, are both decent players for the current first-team squad. However, neither player is really going to be good enough to be considered a star player for their position. As such, they fall into this fourth category of youth players. Whilst an important member of the first-team squad at present, over the next few years the next crop of youngsters will be requiring game-time to develop and therefore these players might be better suited to football at a lower-ranked Chilean club.

Plans for players in each youth category

Ken Sasaki identified these four groups of youth players and has now implemented plans for players in each category.

Youngsters in this category will be given some minutes in the first-team or they will be loaned out. Marcos Antonio, for example, earned some first-team minutes in 2024 for Colo-Colo and has now been loaned out to Bahia in the Brazilian Serie B for the 2025 season. As the main aim for players in this category is to make some profit, it would not be productive to let the player sit in the reserves and stall their development. Sending the players out on loan helps to ensure their development continues and their value continues to rise.

Plan: Give first-team minutes or loan out. Sell for profit.

The foundation of Sasaki’s future squad will be formed by players from this group. Youngsters who enter the first-team through the youth academy are indispensable and will be kept for as long as they are first-team quality. Sasaki is likely to play youngsters from this category ahead of older established first-team players. In the 2025 season, Martin Celedon has now overtaken Brayan Cortes as the first-choice goalkeeper, despite his comparatively young age of 18.

The plan for youngsters in this fourth category is to use them as squad players, giving them game-time to help their development before moving on the players to Chilean clubs once their place in the squad has been taken by a younger player. The aim of this is to eventually strengthen other Chilean clubs and build the strength of the Chilean league.

Plan: Give first-team minutes as part of squad role to aid development. Sell on to lower-ranked Chilean clubs to build league strength and build nation reputation.

Colo-Colo potential stars for the future

Ken Sasaki’s focus on youth has really started to show dividends in terms of player development.

He has played 17 matches for Colo-Colo in the 2025 season so far and he looks set to be the first-choice keeper for many years to come.

One of the most promising players to come through the Colo-Colo youth academy in recent years has yet to play for the club. Ignacio Pichulman received a loan offer from Sasaki’s ex-club Deportes Puerto Montt in the Chilean Primera B.

Pichulman has been on fire for Puerto Montt this season, scoring 18 goals in 27 appearances.

The young striker is certainly one to watch and can expect to feature heavily in the Colo-Colo first-team next season.

Ken Sasaki has effectively implemented his own managerial identity on Colo-Colo and the results are certainly showing. The club are well on the way to a fourth consecutive league title and are progressing well in continental competition. The aim for Sasaki is to win the Copa Libertadores with Colo-Colo and by focusing on youth he is investing in the future.

The next post in this series will review the 2025 season before looking ahead to the future.