Domestic cups can often provide a perfect distraction from the difficulties faced in league football. Clubs can decide exactly how they want to use cup football – it could be to develop youngsters, to chase silverware or to keep lesser-used senior players happy. Previously, we saw how Puerto Montt initially struggled under new manager Ken Sasaki before eventually finding some for heading into the mid-season break. In this third post of VivaGlobetrotting, we will see how Puerto Montt have fared in the second half of Sasaki’s first season in charge.

The Copa Chile provided some much-needed relief from league football for Ken Sasaki and his Puerto Montt side. Whilst silverware was not something on the mind of Sasaki, his thoughts were that wins against lower-ranked sides in the Cup could propel his side into a return to form in league football.

Puerto Montt began their cup run away to Segunda Division side Recoleta. This should have been a tie in which Puerto Montt would dominate and run out comfortable winners. But this is so often not the case in cup football. In the first leg, in front of a crowd of 251 people, Puerto Montt struggled to a 1-1 draw after trailing for the majority of the match. Full-back Juan Jose Contreras scored in the 81st minute to ensure that his side would begin the second leg on level terms.

Another sloppy performance in the second leg could have easily eliminated Puerto Montt in just the 1st round of the Copa Chile. Maicon opened the scoring early in the first half and despite controlling much of the possession Puerto Montt could not create any further opportunities to extend the lead. This lack of creativity was punished in the second half as Recoleta equalised in the 76th minute. Fortunately for Puerto Montt, Jonathan Rebolledo scored a late winner to see his side progress through to the second round of the Copa Chile. A desperately underwhelming couple of games for Puerto Montt will have done nothing to improve their confidence in the league!

The second round of cup matches took place at the beginning of the mid-season break between June and July. In fact, the next two rounds (3rd round and Quarter-Final) would also take place before the next set of league matches. As such, Sasaki was determined to progress through to the board expectation of at least the 3rd round.

To get there, Puerto Montt would need to beat Union Espanola, a Campeonato Nacional side who have, in recent history, competed for the top six places on numerous occasions. As the lower-ranked team, Puerto Montt would host the first leg. After a goalless first-half, both teams came out with notably more intent and it led to two second-half goals. Union Espanola took the lead before Colombian striker Naren Solano scored his first goal of the season. A 1-1 draw meant there was all to play for in the second leg.

Puerto Montt dominated the second leg against Union Espanola, winning the game 2-0 and securing their progression through to the 3rd round of the Copa Chile. Goals from Oscar Hernandez and Leonardo Espinoza either side of half-time gave Puerto Montt a 2-0 lead that they held onto for the rest of the game.

Oscar Hernandez has been in sensational form this season. The central attacking midfielder has been played as an advanced playmaker by Sasaki and he’s thrived in the role. He has certainly shown why Sasaki has fought extremely hard to extend his contract. 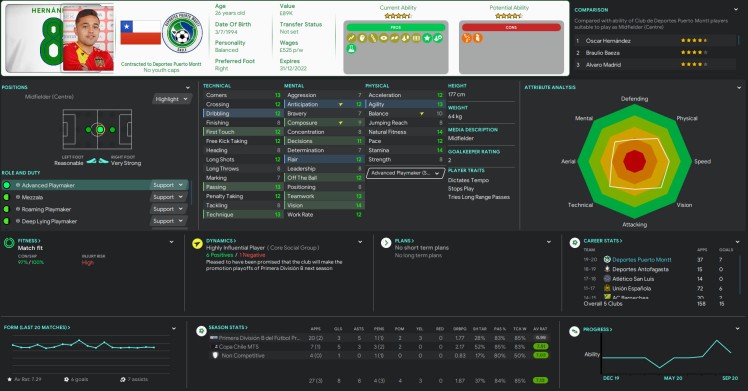 Puerto Montt were again drawn to play another Campeonato Nacional side in the 3rd round of the Copa Chile. Palestino, like Union Espanola, have been a regular participant in the top tier of Chilean football for the past few years.

Ken Sasaki will be delighted with his side’s performance in the opening leg. Puerto Montt ran out comfortable winners as Oscar Hernandez and Nicolas Gauna scored goals in the first half. A 2-0 victory to take to Palestino should give supporters hope that another giant-killing can occur to see Puerto Montt reach the quarter-final.

The second leg ebbed and flowed and yet Puerto Montt never really looked like losing the match. Palestino had several good opportunities to score but couldn’t take them. Puerto Montt, equally, had their fair share of opportunities. It was surprising to see the scoreline end 1-1, but this result was enough to see Sasaki and his team reach the quarter-final of the Copa Chile.

San Luis de Quillota were the side drawn to play second-tier Puerto Montt in the quarter-finals. At the time of the tie, San Luis were higher in the Campeonato Nacional than both Palestino and Union Espanola, highlighting how tricky this match up would be for Sasaki.

Puerto Montt began the first leg incredibly fast. Oscar Hernandez netted the opening goal, scoring a penalty after Espinoza was brought down in the box. Hernandez scored again in just the 9th minute to give Puerto Montt a 2-0 lead. San Luis threatened to get back into the game when they scored midway through the second half but their comeback was short-lived as centre-back Camilo Becerra scored to give Puerto Montt a 3-1 victory.

In a game that Puerto Montt were now expected to win, Ken Sasaki was presented with the perfect opportunity to assess how his players would deal with pressure. In the matches prior to this game, Puerto Montt were the underdogs, even in games where they held a lead from the previous leg. Now, though, Puerto Montt are the favourites.

The favourites tag was well-earned by the club after their run so far and the run was not to end in the quarter-final! Defensive midfielder Banguele scored from distance and Becerra scored for the second time in the tie to ensure Puerto Montt progressed through to the semi-final of the Copa Chile.

Back to league football | Chilean Primera B

After the highs of the Copa Chile, the real test now was to continue this form in league football. The previous post detailed the opening half of the league season where Sasaki was summoned to the board room to discuss his side’s poor start to the season. He was given the target of attaining nine points from the next five games which his side achieved with comfort, winning the first three of these five games.

Puerto Montt returned to league action with a game against Union San Felipe, winning the game 1-0 to see Sasaki confirmed as having saved his job! They won the next two matches before going on a winless run of four games (D3 L1) to see them drop back to 11th in the league.

Primera B table after 22 matches

Puerto Montt scored 11 goals in six games in their three ties against top-tier opposition in the Copa Chile. Since then, in seven league games, they have scored just seven goals – and only one in the last four! Up next will be the Copa Chile semi-final – Sasaki will be hoping his side can find their attacking form in time.

After three consecutive wins against top-tier opponents, it was no surprise to see Puerto Montt pitted against another Campeonato Nacional side in O’Higgins. The Rancagua-based club were exceeding expectations in the top-flight, topping the table ahead of the traditional Chilean giants. As such, this tie would prove to be a much tougher test than the previous rounds.

The first leg was to be played at the Regional de Chinquihue and will go down as one of the most decisive Puerto Montt performances in recent memory. The side took the attack to O’Higgins but failed to take any chances in the first half. They were rewarded for their patience and spirit with a penalty late in the second half. Oscar Hernandez missed, but he pounced on the rebound to give Puerto Montt the lead. Naren Solano scored just his second goal of the season to put the game out of O’Higgins‘ reach.

With a 2-0 lead heading into the second leg, O’Higgins would need to come out firing to get back into the tie. And this is what they did! Puerto Montt conceded two early goals and were completely up against it. Incredibly, they held on to take the tie straight to penalties.

Stepping up to take Puerto Montt’s final penalty was Leonardo Espinoza, who knew that scoring would take his side to the final. But a shocking effort, hit straight to the keeper, gave O’Higgins a way back into the game. They needed no second invitation as they scored and we missed, knocking Puerto Montt out of the Copa Chile.

Striving for a top-half finish

The Puerto Montt board were understandably delighted with Sasaki’s performance in the Copa Chile. However, the performance of his side in the league has not been as comforting. The poor start has contributed to this and since being summoned to the board room, Puerto Montt’s performances have improved. But in such a tight league, a drop in form could easily see them drop nearer to the relegation places.

An inconsistent end to the season

Three wins, two draws and three losses was a very inconsistent way to end the season. A crushing 4-0 defeat to Curico Unido was hugely disappointing. Puerto Montt managed to finish in 11th in the league.

The board were disappointed with the bottom-half finish, and Sasaki may have feared for his future had Puerto Montt not achieved that magical cup run. He will be determined to achieve a more consistent season next year. The planning for 2021 begins here!

Thanks for reading another post here on VivaLaVidaFM. If you enjoyed this post, please let me know in the comments!