Globetrotting, defined by the English dictionary as ‘the act of travelling to a lot of different countries’, forms the main idea behind many of my Football Manager saves. I love building a club up from nothing and making them one of the most feared clubs in the continent. My Ostersund save from FM18 still remains one of my best ever FM saves. However, I always find myself drawn back to ‘journeyman’ saves where I will move around a range of clubs, aiming to reach the pinnacle of football by whatever means necessary.

VivaGlobetrotting, defined by VivaLaVidaFM as ‘the act of building a football management career from scratch through travelling to a range of clubs across the globe in a realistic manner’, is the save I am most attached to in my FM history. I began with a club in Chile named Deportes Puerto Montt and worked my way up to reach Celta Vigo in Spain, where a full-on Champions League assault took place. The decisions I took in this save, in terms of which clubs to manage, were based on my own opinion on what would be realistic. Would an unknown Chilean manager begin scouring the lower leagues of English football for a club to manage? Would a Spanish-speaking manager, with minimal experience of living in an non-Spanish speaking country, chase European football in a non-Spanish speaking country? The career path I took in FM17’s version of VivaGlobetrotting was as follows: Deportes Puerto Montt and Union San Felipe (Chile), Deportes Tolima (Colombia), River Plate (Argentina), Chicago Fire (USA), Celta Vigo (Spain). A fairly realistic manager timeline in my opinion.

Even in saves where I set a pre-determined end goal, such as managing Real Madrid, I would take decisions that I felt are realistic. In a save where I began as national manager of Fiji with the end goal being to reach Real Madrid, my career timeline ended as follows: Fiji, Sydney FC, Swansea City, Dundee, Man Utd (the motivation for FM waned here and the challenge was not completed). I won the ACL with Sydney, prompting Premier League side Swansea to seek my skills. I was sacked by Swansea and took the reins of Scottish side Dundee. Here, I built the club and won the SPL. Perhaps seeking the next version of Ferguson, Man Utd appointed me as manager. Again, fairly realistic up until the Dundee to Man Utd move perhaps.

For FM20, I will again be VivaGlobetrotting. So, without further ado, let’s introduce the manager: Ken Sasaki.

Ken Sasaki was born and raised in Higashihiroshima, Japan to a Japanese father and Swedish mother. Sasaki grew up in love with football, idolising Shunsuke Nakamura in particular, and became a professional footballer when he joined J1 League club Sanfreece Hiroshima. A dynamic, pacey, left-sided winger, Sasaki spent just three years with Sanfreece before he attracted attention from European clubs.

Legendary Swedish manager Oscar Friberg, then boss of Ostersund, approached Sasaki to join the Swedish top-flight club. Friberg himself flew out to Japan to meet his family and was a key factor behind Sasaki making the move to Europe. Friberg paid just under a million to sign the winger and this proved to be one of the most impressive deals in Friberg’s career with Ostersund. Sasaki made 295 appearances for Ostersund, scoring 24 goals and making 84 assists. In nine seasons with the club, he helped guide them to 7 league titles and four Swedish Cups. The highlight of his time in Sweden was starting and starring in the Champions League final, helping the Swedish side win the top prize in European football. 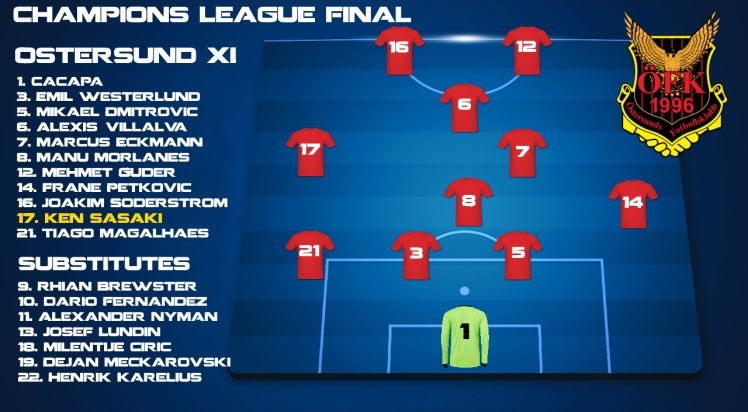 This signalled the end of Sasaki’s time in Sweden, with both parties mutually agreeing that it was best for the Japanese legend to move on. Whilst it may have been easier for Sasaki to seek a move back to the J1 League, his determination to make the most out of his last few years as a professional footballer took him to South America. Argentinian side Boca Juniors first signed Sasaki, where he spent just the one season before moving on to Chilean giants Colo-Colo. Here, he helped the club win back-to-back Chilean titles before moving to his final club Deportes Puerto Montt. Sasaki spent one season with Puerto Montt before retiring from professional football.

Since his retirement, Sasaki has spent time at home in Japan with his young family. However, his desire to enter the world of football management has not waned and this desire has taken him back to South America, specifically Chile, where he has been approached to become the new manager of his final club Deportes Puerto Montt.

Puerto Montt is both a city and commune in Chile. The city was of great historical and strategical importance in the late 1800’s as it provided a gateway to several key locations in Southern chile, such as the Chiloe Archipelago and Lake Llanquihue. The footballing side of Deportes Puerto Montt were founded fairly recently in 1983 and play their football at the Estadio Regional de Chinquihue, a 10,000 capacity stadium in the city of Puerto Montt.

The club began their existence in the second tier of Chilean football and rose to the top tier for the first time in 1996. Arguably their best season to date came in 2006 where they topped their group in the Torneo Clausura. They lost in the quarter-finals of the playoff stage to giants Colo-Colo and therefore failed to qualify for the Copa Libertadores. This remains the closest they have come to qualifying for continental football.

Their lowest point came in 2012, where they were relegated to the third tier of Chilean football for the very first time. Puerto Montt currently play in the Primera B, the second-tier in Chile, after returning to the second-tier in 2014.

My history with Puerto Montt

This will now be the third time I have managed this small Chilean club on Football Manager. So why have I found an affinity with a club that I had never heard of prior to 2016?

In FM16, I began a save unemployed with no prior experience and no coaching badges. I had never previously managed in South America before and so I decided to load up the leagues there and search for my first job. Puerto Montt were the team who gave me a chance and what followed was ten or so seasons of fun. I never led the side to a championship. In fact, from what I remember we never broke into the top six of the Chilean Primera A. However, I remember the save for the Chilean Cup we managed to win and for the players that we had. Alejandro Hurtado, a young Chilean who we sold for a record £5M, became the manager that fronted my VivaGlobetrotting campaign in FM17. Overall, my time on FM16 with Puerto Montt provided me with fond memories moving forward with Football Manager.

For FM17, I began a VivaGlobetrotting save with Alejandro Hurtado. Rather than starting unemployed, I began with Puerto Montt. And it could not have been further from the FM16 save I had with the club. I was sacked from the club after 17 games, winning just one. I went on to manage Union San Felipe, winning the Primera A some time into my career with the club.

This year on FM, I will again be taking the post of Puerto Montt manager. Let’s hope it follows suit with FM16 rather than FM17!

I hope you have enjoyed this introductory post to my FM20 VivaGlobetrotting save. I’m looking forward to getting started with Ken Sasaki and seeing where his career goes. As always, I will be playing the game in as realistic a way as possible, meaning I will look to make decisions that make logical sense with regards to where Sasaki decides to manage. Hopefully you will enjoy following along with the journey!