The last time we saw Marcus Allback, he’d just received contact from owner Rolf Elgeti via the birdplane after dominating League Two and earning promotion to League One. In this post, we see how his Stockport side fare in the first half of the League One season.

It was finally time to start the pre-season again! With last season’s success still fresh in his mind Marcus Allbäck felt more excited than ever. He just wanted to get started to see what his extraordinary group of players could achieve this season.

As he pulled up with his car outside the training ground he noticed players out on the training pitch. He was about to run up to the pitch to stop the intruders from ruining the grass ahead of the training as he realized that the players were his own! Had he made a huge mistake and missed the first day of practice? Had they started training without him?

As he started walking towards the pitch he heard a man shouting at the players. The shouts were angry. Angry angry shouts. Marcus saw his beloved group of players sprint from one side of the pitch to the other as the angry man screamed “faster! FASTER!”. When the players reached the other side the man laughed a scornful laugh. “Wow! That was the worst run I’ve ever seen! I can’t even try to imagine how a team full of weaklings like you managed to gain promotion to League One, let alone manage to put on your shoe on the right foot!” “AGAIN!”, he screamed, and the players took off back over the pitch.

Marcus Allbäck couldn’t contain his anger as he ran towards the man. “Who are you? What the hell do you think you’re doing?” he screamed at him as he got within shouting distance. The angry and upon closer inspection strangely familiar man, just turned his head towards him with an evil grin on his face. “I’m Tony Pulis and I’m here to stop all your shenanigans and turn these boys into men”. Marcus Allbäck suddenly understood why he had recognized the man but couldn’t believe his nerve. “Get off my pitch. Immediately” he said with anger in his voice. “You have no right to be here”. 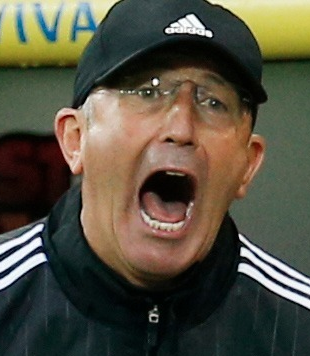 The words didn’t seem to affect Angry Tony Pulis. “Au contraire” he said. “I have every right to be here. I’m the new Technical Director. I’m your new boss”. Marcus Allbäck stood there, gobsmacked and unable to move a muscle as Angry Tony Pulis turned his attention away from him back to the tired players lying on the grass. “Again, you weaklings. AGAIN” he screamed and his evil laugh echoed across the training ground as the players took off over the pitch yet again.

The arrival of Angry Tony Pulis brings a couple of changes. First of all, Angry Tony Pulis was extremely dissatisfied with the softness of the players in the current squad. This resulted in him bringing in 180 players for one of the most massive trials ever witnessed. Amongst themselves in the coaching staff they called it “The Pulis-o-rama” and laughed behind the back of their new Technical Director. 40 of the players were sent straight back home after a single practice and over 100 players where sent home after three days. A handful of players managed to survive for an entire week and were rewarded with contracts.

Another change was the newly devised “Angry Tony Pulis Rating”, consisting of a total score of the most important skills needed to be a real man, I mean good footballer.

The most important attributes are Aggression, Teamwork, Work Rate, Tackling and Strength. These attributes, together with 4-5 position-specific attributes results in the “Angry Tony Pulis Rating”. All of the players above rated high and most of them were quickly made into key players by the angry Technical Director.

The ATP Rating consists of a base rating, which is the same for every position. These are attributes needed by every player on the pitch, regardless of position.

(Tackling+Aggression+Teamwork+Work Rate+Strength)/2 provides a base value between 2.5 and 50. The players are also rated by position-specific attributes. For example, the position-specific attributes for the central defender position are Bravery, Heading, Marking and Jumping Reach. By multiplying those four attributes by 0.625 you get another value between 2.5 and 50 providing a total rating between 5 and 100.

Above you see the squad in its entirety sorted by base value, also showing the different positional ratings.

The third and final change was the return of the “Sexi Brexi” tactic. A huge step away from the passing oriented Bielsa influenced style of play that had been used for the last couple of seasons. Back came the risk-minimizing long-balling style from the first couple of seasons, all in line with absent owner Rolf Elgeti’s vision of how the English people want their football. 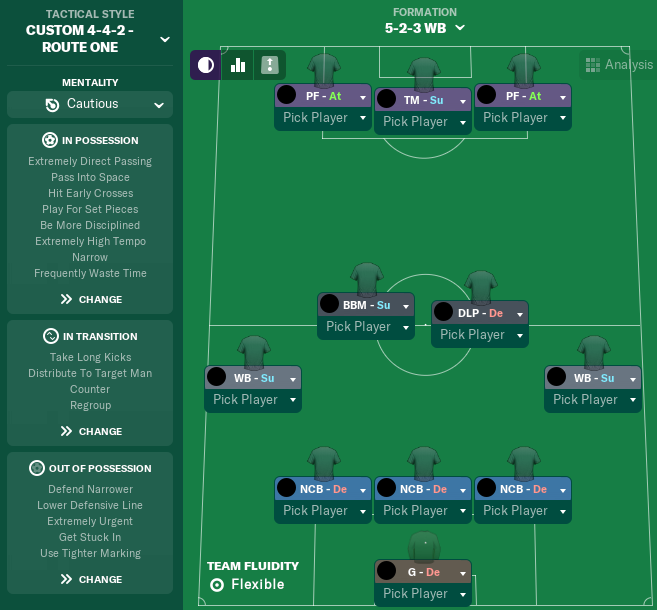 So, how did the team perform in the first half of the season as newly promoted to League One?

The more conservative style of football certainly didn’t stop the team from winning. With 17 wins in 27 games Stockport sit in 2nd place as 2022 becomes 2023. With 7 points down to 3rd placed Charlton and 15 Points down to 7th placed Exeter just outside of the play-off spots the possibility of an unprecedented back-to-back-to-back-to-back promotion is certainly realistic! 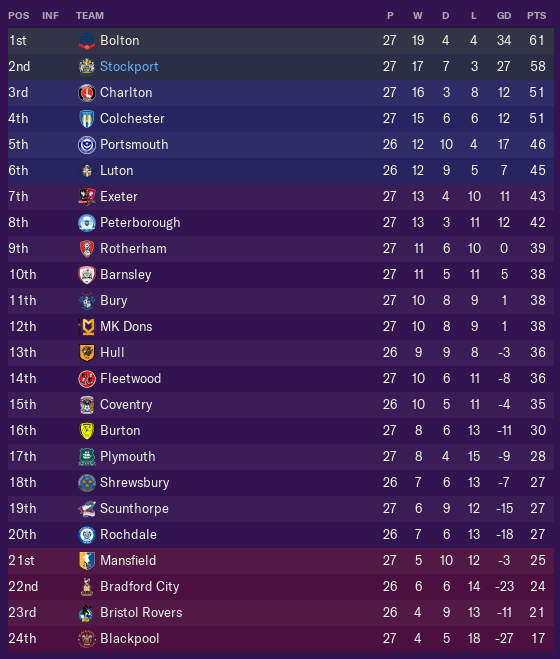 An excellent start to the League One season

With the return of the straight-forward 3 attacker system central forward Frank Mulhern has certainly thrived. With 26 goals in 24 games he is the single biggest reason for the club’s success this season. Left and right attackers Wright and Connell have been good as well with a total of 20 goals and 18 assists between them, but they are nowhere near Mulhern.

Going into the final 20 games of the season the team can certainly reach promotion if they manage to stay effective and keep the strikers scoring. Without injuries to key players the prospect of playing in the Championship next season is not in any way utopian.