Welcome to another post in the brilliant Sexi Brexi series by MikaelinhoFM. If you missed the last post, do go back and check it out. We saw popular manager Marcus Allback ignore instructions from Rolf Elgeti by continuing with the fast flowing attacking football that served them so well.

Manager Marcus Allbäck had been constantly complaining about how hard it was to find decent players being a newly promoted League Two side. The only players interested in joining besides the usual Academy rejects were non-league players, more often than not of quite inferior quality to the players already in the squad. However, every once in a while you get a golden opportunity. Such an opportunity fell into the lap of Marcus Allbäck, and luckily it fell in a time when there was money in the bank.

Sheffield Wednesday left wing back Matt Penney had found himself sidelined since the arrival of Fulham acquisition and Scottish international Joe Bryan, which wasn’t a situation he could easily accept. At the age of 22 he needed game time and since he wasn’t getting it at Sheffield Wednesday he wanted to leave. When Stockport came in with a €450K bid for his signature he didn’t hesitate one second.

With over 50 games in the Championship and League One to his name he brings much-needed experience even though he’s only 22 years old. He will primarily be used as a left wing-back, where he’ll make an excellent addition offensively with 14 in Crossing and 12 in Vision. He is decent enough to hold his own defensively as well and his mentals makes him a perfect match for the “Move like Bielsa” tactics. The only downside is the fact that his primary position is left wing back, a position where Stockport really didn’t need any upgrades. Scott Duxbury has been one of the best players and behind him young Reece Devine has been proving his worth as a backup. However, when you get an opportunity to sign a player of this caliber you have to take it. Hell, he’s probably good enough to start as a central midfielder as well… 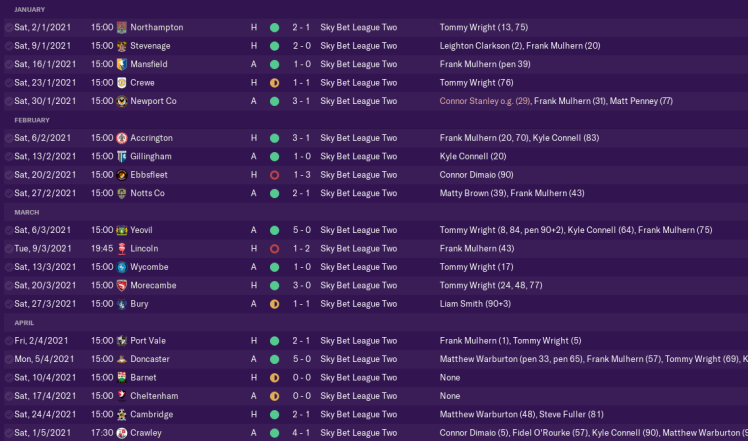 Second half of the season form

The amazing form from the first half of the season simply just continued into the second half. With the “Move Like Bielsa” tactic the team only lost two games from January through April.

That the team would gain promotion was more or less a given after the first half of the season, but the margin down to 4th placed Northampton was still very impressive, with an unprecedented 33 points.

Just like last season Frank Mulhern and Tommy Wright were phenomenal! Mulhern became the League Two top goalscorer with 28 goals, one goal ahead of Wright. Scott Duxbury kept providing assists from his left wing-back position and Kyle Connell provided 12 goals and 19 assists from his position out on the right.

To highlight the fantastic achievement of the Stockport team no less than six players made the team of the year while Marcus Allbäck managed to win Manager of the Year!!

League Two team of the year

After gaining back-to-back promotions the feeling going into this season was that it might end there. The team had been punching above their weight for too long and opposition teams were constantly getting better every year as the team climbed the leagues. However, the team certainly proved this feeling wrong by absolutely crushing League Two! Now there is really no stopping them, is there!?

Marcus Allbäck had finished the last practice session of the season and was just about to head off the pitch towards his office as he noticed a dove landing a few feet away from him. He took a step towards it to scare it off, but the bird didn’t move an inch. The dove didn’t seem injured or anything, it just stood there, looking Marcus straight in the eyes. As he took another step towards the bird it reached out one of it’s legs, revealing a small note wrapped around it. With shaking hands Marcus unwrapped the note and opened it. The words were few but the meaning of the note came across ever so clearly.

“Stop what you are doing.
You are ruining everything with your running and passing.
Consider this your second and final warning.

Just like last time Marcus simply threw away the note. He wasn’t gonna be scared into obedience. If owner Rolf Elgeti wanted changes, he had to show up in person. His newfound confidence was immediately bruised as he looked at the bird, still standing still in the grass. It looked displeased in a way he’d never seen a bird before. Marcus felt a bit insecure, maybe the threats were serious this time…