In the last episode Hansa Rostock ended the first half of the 2017/18 season in 6th place. In this episode, we see how our German club perform in the second half of the opening season.

He ran. And he ran and ran and ran. The running seemed to be endless. And he yelled. The older players had initially been annoyed with him. “Who does he think he is?” Selcuk Alibaz had asked another team-mate during a training session. “Who does he think he is, handing out orders and scolding players? He has only been here a week but already acts like he’s been here longer than anyone else”.

Now, as they were getting close to the end of the season not a single player could remember what practice had been like before the arrival of Gustav Sandberg Magnusson. They all loved him now, and most of them wanted to be like him. They loved him for the constant running. And the yelling. And the way he pushed all of them to improve every single day. If the way he played football was the future style of Hansa Rostock, they all wanted to be a part of that future. They were all certain that he was going to be named captain next season, but he was already their natural leader both on and off the pitch.

Gustav Sandberg Magnusson came in from Swedish club Brommapojkarna as the most prolific signing so far for a record fee of €425K. With an IKEA rating of 72% he is the player that best personifies the way Hansa Rostock want to behave on and off the pitch. He lacks a bit of technical ability, but he’ll be a large enough presence in midfield with his leadership and work rate. Hopefully he will be good enough at passing the ball to get it to our more creative players at least.

Despite the arrival of a new natural leader the team struggled to find any consistency. A decent start was followed by 7 games that only produced 3 points. This prompted a change in tactics from the original 4-2-3-1 to a more traditional 4-4-2. The change worked wonders as the team won three straight games in convincing fashion.

The rise in form put the team in a good position to compete for a promotion spot in the very first season. Six teams were in contention for two automatic promotion spots and a 3rd place play-off spot.

Rostock started off against Jena, one of the club’s local rivals which meant that there were more at stake than just 3 points. Local bragging rights are always important!

The derby ended in a draw after a Jena equalizer in extra time, which felt a bit disappointing, but when Unterhaching beat Paderborn a day later it meant that Hansa Rostock actually got one point closer to automatic promotion!

With three wins in the last three games Hansa Rostock managed to reach 2nd place and an automatic promotion on goal difference ahead of Unterhaching. 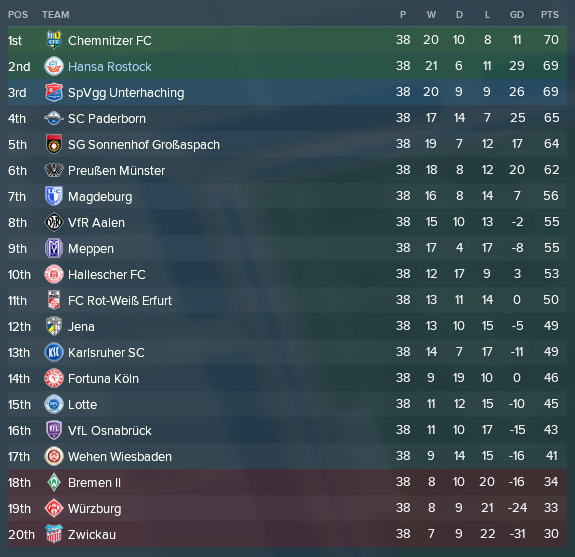 The change of tactics really paid off with six wins and a draw in the final seven games!

Three players really stood out in the 2017/18 season. Pascal Breier, with an outstanding performance throughout the season and 25 goals to his name broke the Hansa Rostock record of league goals in one season and became the 3rd Division top scorer. Marcel Hilssner became 3rd Division Player of the Year ahead of teammate Amaury Bischoff.

On a side note, FC St. Pauli managed to climb out of the relegation spot in the 2. Bundesliga in the final game of the season, which means that we’ll get to experience double derby games next season against the fierce rivals from Hamburg!

The youth intake produced a player of real quality and potential. Despite being technically gifted enough to try first team football straight away, Kai Otto will need to wait almost two seasons for his debut due to German registration rules that doesn’t allow players under the age of 17 in senior games. He will be nurtured and shaped in the Academy to be ready to make an immediate impact when he’ll get the chance though. His time will most certainly come!

Because of a serious lack of funds the club will need to rely almost completely on their own Academy products and we’ll probably see more or less the same squad as this season face a fierce relegation battle in the 2. Bundesliga next season.

Until next time, auf Wiedersehen!

For more content by @MikaelinhoFM, do go and check out his Brommapojkarna save! Follow the link below to check out the series from the very beginning.