Hello and welcome to a Football Manager 2018 player guide. In this series of articles we look at various youngsters in-game. We take a look at how you can improve your development of this player and how they progress five years into the future. In this guide we look at Ruben Loftus-Cheek. 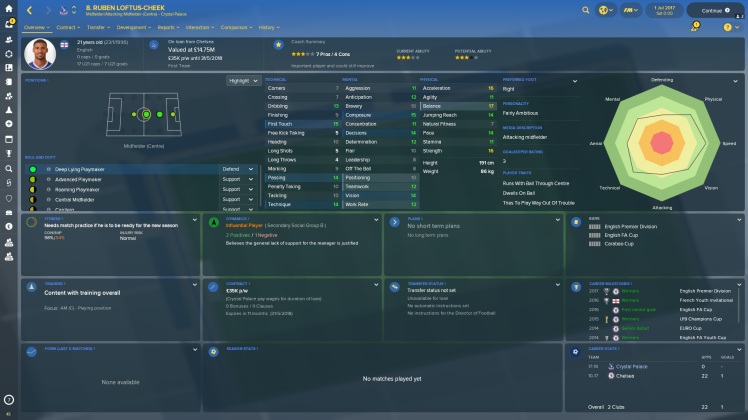 Ruben Loftus-Cheek can play through the spine of the team in all positions from DM to ST. He is, however, most natural as either a CM or AM. In terms of his favoured roles, Loftus-Cheek prefers to play as a deep-lying playmaker in the CM position.

He could do with working on his positioning as this is the only key attribute of the DLP role that is below 12. In his report, one of the big cons is his poor long shots attribute and so it would be wise to play Loftus-Cheek in a role that reduces the number of long shots he takes. Either that or add a specific player instruction to prohibit long shots being taken. 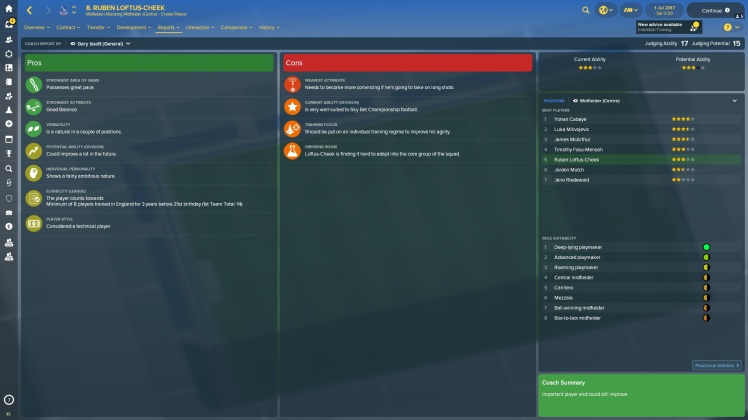 Loftus-Cheek is only on loan at Crystal Palace, so it really depends on which team you are managing as to how you’d use him. As Crystal Palace boss, you certainly have better options in the centre of midfield. But in the attacking midfield role, Ruben is rated equally with Jason Puncheon as your best option.

If you are Chelsea boss, you can only hope that Palace play the youngster as you do not have the option to recall him.

Training | How to get the best out of this young player

At 21, Loftus-Cheek hasn’t got many years left to reach his full potential. At present, he has decent attributes to be a useful player for Premier League sides without becoming a great player.

I’d be tempted to give him a year or two training the Box-to-Box role. Even though I would have no intention of playing him there, the role trains attributes in which he needs to buff up a little. 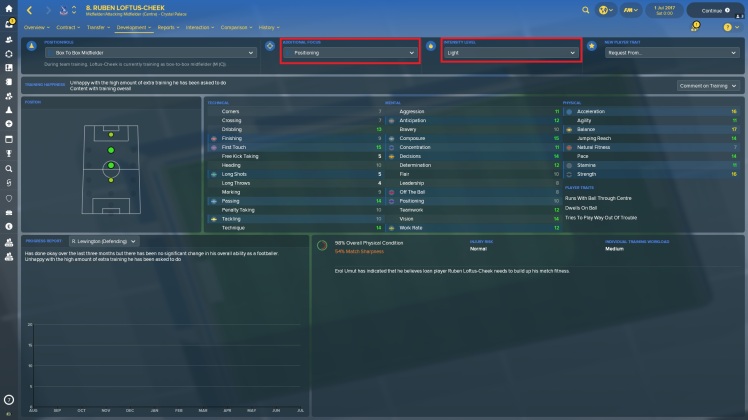 I would also work specifically on Loftus-Cheek’s positioning attribute. If that could increase by 2 or 3 then he could really be a decent option as DLP moving forward. As the medical centre and injuries are given a greater focus this year on FM, I would reduce his training intensity to low so as to minimalize the chances of injuries.

Whilst on loan at Crystal Palace, Ruben won’t be able to benefit from any tutoring. But once he returns to Chelsea it would be my priority to give him a tutor to help him grow both mentally and technically.

N’Golo Kante would be my pick of players suitable to be his tutor. I feel that Ruben would benefit hugely from Kante’s defensive expertise along with his professional personality.

Game-time, as with all youngsters, is critical to Loftus-Cheek’s development. At Crystal Palace he should be given a good amount of games, but he’ll only improve if he’s given match time at the highest level surrounded by the best players.

Once he returns to Chelsea he’ll certainly be hoping for a feast of first-team football.

Check out some more player guides below:

For the next portion of our guide, we’ve simulated five years into the Football Manager future to see how our youngster has progressed.

It appears that the development you’d hope to see over five years simply hasn’t occurred. Loftus-Cheek is looking like a pretty average PL / Championship midfielder.

And the problem is clear to see. Leicester City can take credit for potentially ruining the youngster’s career after they bought him from Chelsea in 2018. After playing 22 league matches in his first season at the club, Leicester decided to drop the midfielder to the reserves.

He made 0 further PL appearances for Leicester in two more years at the club. These two years of reserve team football would really have put an end to any chance of Loftus-Cheek reaching his potential. This shows in his current attributes.

Loftus-Cheek made only 75 club starts in five years, an average of 15 starts per season. His pass completion of 78% is good for a central midfielder, but these stats can be skewed depending on the style of football each side plays. A more direct style would lower the pass completion percentage.

So what went wrong for Ruben Loftus-Cheek? 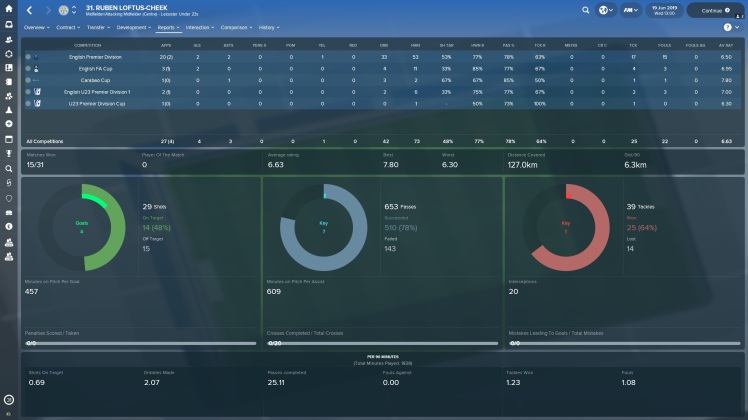 Leicester brought in Loftus-Cheek from Chelsea and he went on to play a part in 31 games in all competitions for the club in the 18/19 season. In these 31 games he averaged a match rating of 6.63, very poor for any Premier League player.

You can see why Leicester dropped him…

So why did he play so poorly? Leicester finished in 9th place in the league and so it can’t be down to the team being poor. Loftus-Cheek was being played in an attacking midfield role yet only managed to contribute to 7 goals in his 31 appearances.

Leicester played a 4-2-3-1 formation in 20 of the last 20 matches of the season (this is as many matches as I can see) which would include an attacking midfielder in the middle. 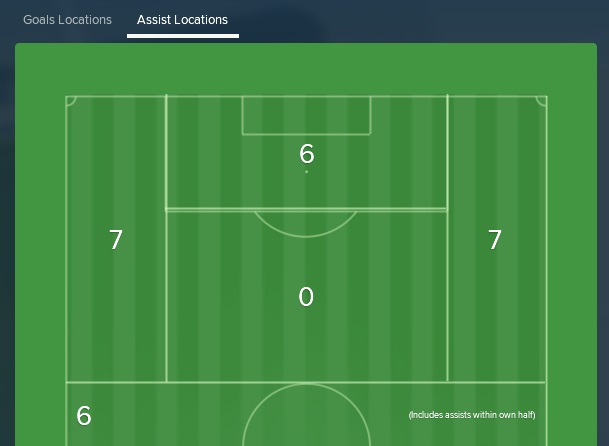 Interestingly, a look at Leicester’s assist locations from the season shows that 0 assists were made from the attacking central position. Although this could just be as a result of Ruben’s poor performances, it could also be an indication of where Leicester were trying to play their football.

And of course, if Loftus-Cheek wasn’t receiving the ball then he wouldn’t be able to affect the game.

For Leicester to just drop Ruben to the reserves for two years is hugely unfair, even after his 1 poor season with the club. This clearly stunted his development and meant that his attributes stopped increasing and even began to decline slightly, which is never good for a player in his early twenties.

To add to his turmoils, although he has been capped by England in real-life, Loftus Cheek never managed an appearance for his country on FM18. Let’s hope that he can knuckle down with Sunderland and become an important figure in their team.

Thank you very much for reading our FM18 player guide to Ruben Loftus-Cheek. Do you have a player that you’d like us to review? Leave a comment down below to tell us.