Founded in 2007, Mumbai FC are an Indian football club based in the Maharashtra state of India. The club are currently part of the Indian first division (the I-League) and have only spent one year out of the top division.

In Football Manager you take over a team in a very poor league in terms of quality. Despite the size and stature of India, their football league leaves a lot to be desired. You will need to extract the most out of all of your players to find success.

The following post is an overview of the club should you choose to take them on in Football Manager 2017. Go on, be someone new!

Brazilian central midfielder Alex Willian is one of your more creative players in an attacking sense. His good mental attributes allow him to dictate matches and work out how to win football games, this mental edge will prove useful in tighter games.

Trinbagonian Densil Theobald is an ageing player who you may look to move on (if he doesn’t retire) at the end of the season. Nevertheless, he still remains one of your better players, despite having just 4 in tackling and 5 in marking (he is suggested to play as a ball-winning midfielder).

This perhaps indicates the weakness of the majority of the squad!

Anderson is your star player. His physicals let him down somewhat, yet he makes up for this with his technicals. Use him wisely, the Brazilian is 29 and may only have a couple of years left at the top of his game. 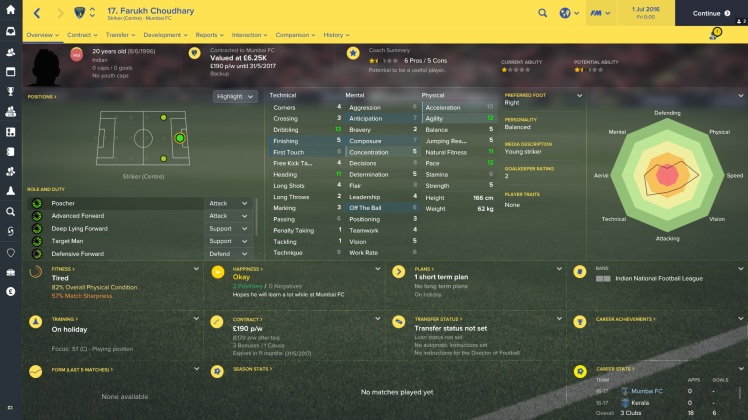 20-year-old striker Farukh Choudhary may well be used as your starting striker this year. He has a small amount of potential to grow, but of your better younger players he may well be favoured to develop the least. 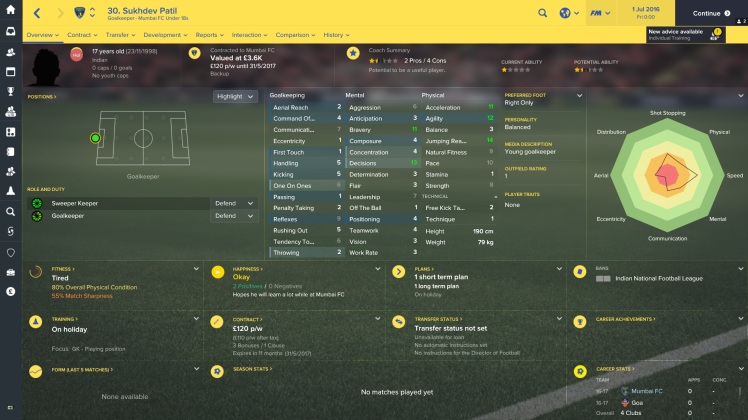 Sukhdev Patil is a goalkeeper with some potential. At 17, he has time to grow and it may make sense to give him a tutor in order to improve his determination.

The player with the highest potential at Mumbai FC looks to be winger Hitesh Sharma. He is a pacey winger who may well be better suited as an inside forward. His decent finishing (for this level), alongside his pace, could make him a candidate to be retrained to play as a striker too. 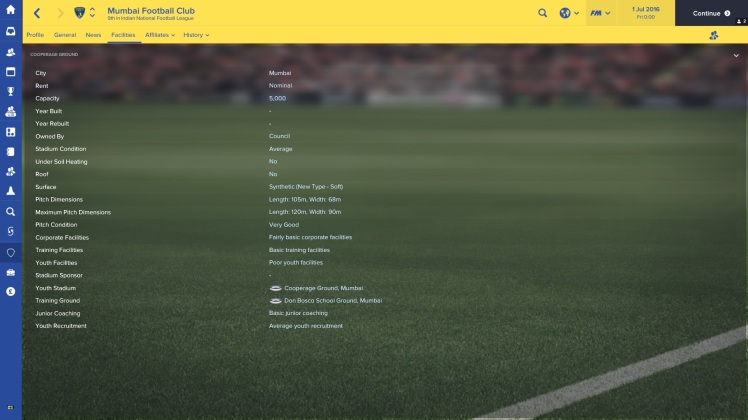 It is quite obvious that any big money signings are out of the question, at least for the moment. Instead, you have a limited budget to build a squad capable of winning league titles, meaning you’ll need to look to the free transfer market for some hidden gems.

India has a population of over 1 billion, the 2nd largest country, by population, in the world. Yet their national football team sit 152nd in the world rankings.

Can you build up the quality of the league and ensure that the national team begin to climb the rankings? You’ll need a lot of patience, but improving the standard of football and building the Indian nation should be a challenge that will keep you entertained for quite a long time.

Thank you for reading our club guide to Mumbai FC. I hope it may have inspired you to begin a save with the Indian club.

If you have a club that you would like to see a guide for, leave a comment below!