Alejandro Hurtado has had plenty of time to think about how to take Chicago Fire, from the depths of the MLS, and develop them into a competitive American side.

And this he has done. At the end of the previous season Chicago had just 8 real / regen players in their squad (the rest were made up of greyed out players).

No fewer than 18 players were brought into the club over the winter. Two of these transfers have left the club since joining due to the squad registration rules in place in the MLS.

Alejandro Hurtado has managed to pull off an incredible coup for the struggling Chicago side by signing Leon Goretzka from Arsenal. 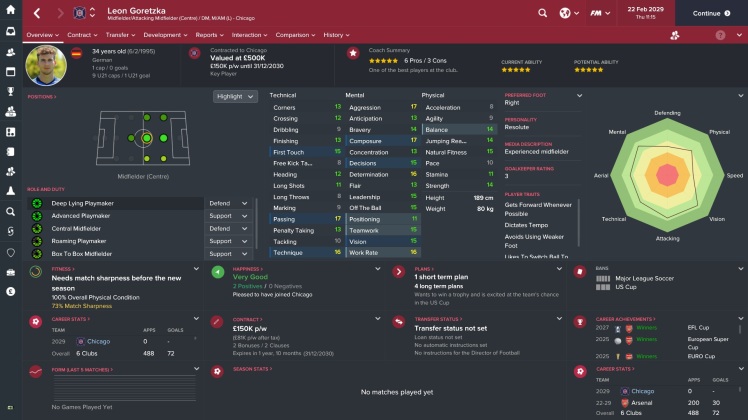 The 34-year old made 200 appearances throughout his time at Arsenal having previously been at Liverpool. He looks set to be the star of Chicago over the coming season.

In addition to Goretzka, Hurtado also pulled in a creative attacking midfielder in a bid to improve the attacking threat of the Men in Red.

Patrik Kovac is a young Slovakian international that could provide the extra creativity Hurtado desired.

The other transfer worth speaking of would be our new striker, Ernesto Gallardo, signed on loan from Patronato in Argentina.

He will lead the line as our target man and will hopefully prove effective with our direct system.

The new look Chicago squad (without the grey men from our previous post) went into pre-season in high spirits.

We played just the four pre-season matches and won 2. Our new striker Ernesto Gallardo scored four in the last three matches, highlighting how crucial he could be to our success this season.

Alejandro Hurtado will begin this coming season with the same tactic that ended the previous. Chicago will look to play a direct style of football in an effort to bring target man Gallardo into the games. This proved successful throughout pre-season.

Despite the overhaul of our first-team squad, this could well be a tricky season for Hurtado and his men. The squad is largely made up of developmental players due to the lack of available American talent.

The board want us to be competitive this season which alleviates a lot of unwanted pressure should we have a bad start.

Thanks for reading our third update with Chicago Fire. If you enjoyed this post please feel free to share it around via social media or simply let me know through the links above.