Welcome to the 25th post in VivaGlobetrotting. We’ve made great progress in our South American adventure so far having managed in Chile, Colombia and now Argentina.

At the beginning of this journey, the aim was to win each top tier South American competition.

However over the course of our ten in-game seasons it has developed into more of a story based adventure than I’d planned.

Of course the series was always going to revolve around Alejandro Hurtado, our Chilean manager, as it began as a challenge to conquer South America. But over time I feel like we should make decisions in game as Hurtado would make in real life.

It is possible that throughout his career he might want to dominate South America. But who’s to say he wouldn’t try his hand in the MLS first? Or perhaps move to Europe to take over Sevilla, the club he played for in his professional career? In short, VivaGlobetrotting is moving away from the “let’s win every competition in South America” idea and instead transitioning towards being a realistic journey for our Chilean hero Hurtado.

Our first signing of the summer, and my favourite at River Plate so far, is Real Madrid defensive rock Casemiro. With our 3-4-3 formation in mind, we bought in Casemiro to the club to play a major role in our club this year.

Also joining the defensive structure is Vicente Ortiz. The Chilean looks to be a very fine defender with a huge draw being that he is left footed. Throughout the summer I kept my eye open for left footed defenders to take the left-sided defender spot in our three at the back system.

These were the main two signings in a relatively low key transfer window. We made £5M in transfer fees from selling players. £3M came in for a central midfielder we wouldn’t be using and another £2M was paid for a player I hadn’t ever seen before. £2 Million!!

We sit in a good position in the league after ten matches. Racing Club lead the way with 25 points with us two points behind them. Both teams have a game in hand over those directly below us.

In our last match we lost to Velez where a win would have seen us climb above Racing into first.

We progressed through to the Copa Libertadores Quarter Finals by beating Atletico Paranaense 4-3. For the QF’s we were drawn against Vasco da Gama.

After two legs we were tied at 5-5 with equal away goals. The tie was to be decided by a penalty shootout.

And as you can see we lost. Kevin Sibille, our strong and reliable centre back missed the crucial penalty to see us exit the competition.

With luck going against us in the Copa Libertadores it would be foolish to expect us to walk the Copa Argentina, regardless of the teams left in the competition. We’ve reached the Semi Final stages of the competition where we will play third division side Villa Dalmine.

In the other SF Argentinos Juniors play another third tier side in Tristan Suarez.

As I rarely delve into the world of tactics on my site I thought I would take the time in this post to take a deeper look into the tactic that is currently bringing us success. I never tend to go with three centre-back formations in FM, usually I’m just a standard 4 at the back kind of guy.

But with the additional South American flair that Hurtado possessed in his playing days, I’ve experimented with a rather quirky 3-4-3, as first seen in ‘Two Points Off Top’.

Our 3-4-3 tactic is based on how we win the ball back and break quickly. We try to exploit the right flank by using a pacey winger on attack who can then deliver whipped crosses for our forwards to attack.

Here are some screenshots of the base of our tactic from our league win against Argentinos Juniors.

In these images you can see how our tactic sets up when the opposition try to break us down through the middle.

Opposition player Rojas is attempting to cut in from the wing (why you would do that when we are playing no full-backs….) and our two defensive midfielders have the job of protecting our back three.

Casemiro is first to the ball, closing down Rojas. Rojas then passes the ball on to number 4. This is Alonso’s man.

Alonso is able to close down 4 before he can release the ball, thereby winning the ball back for our team.

I’ve highlighted San Martin in these screenshots as I believe his positioning is important here. Without our two defensive midfielders he would have to take the role of closing down Rojas, therefore leaving a gap behind him for forwards to exploit. In having Casemiro and Alonso protecting the back three, we are defensively solid when the opponents attack through the middle. 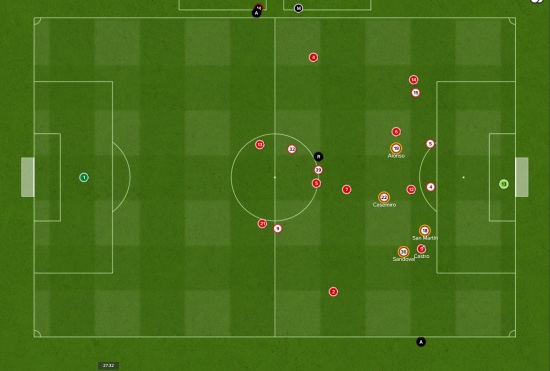 Here we have a situation where the opposition are attacking down the wings. We are exploited, and the goals we concede are often from situations like this.

A through ball is played by Tucker to Castro.

Our defensive winger is not fulfilling his duties as he lets Castro get goal side of him. This in turn draws our centre back out of position. Despite this we still have Barrientos and Sibille in the box with just one of their players looking to attack the ball.

But this is enough as Jiminez gets in ahead of Sibille to score.

I am of the opinion that this is a fault with the players and not the tactic as with every tactic there are areas to exploit. With our tactic it is the wings but we still should have the players in good positions to combat this.

The next post in this series should be around ten games before the end of the 2027/28 season where we will hopefully be fighting for the Argentine Primera Division. And we will potentially have lifted our first trophy for the club by then too!

Thanks for reading another instalment of VivaGlobetrotting. Be sure to follow us on the links above to stay in the know for all things FM.

I hope you have enjoyed this little insight into our tactics. By no means am I claiming to be knowledgeable on tactics, this is just how I see my tactic playing and how it works for me. For tactical advice I would look elsewhere! Stay tuned for more Football Manager content!