Welcome to another Football Manager 2017 experiment post. Previously on our website we have changed the positions of Paul Pogba, Sergio Ramos and Gerard Pique. In this post we’ll be seeing how Diego Costa and Romelu Lukaku fare as centre-backs.

Both players have qualities that are generally looked for in defensive players.

How do they look in their new roles? Let’s see

Costa is near-perfect mentally to perform in the role of centre-back. Of the mental attributes deemed important for DC’s only his positioning is below 15. 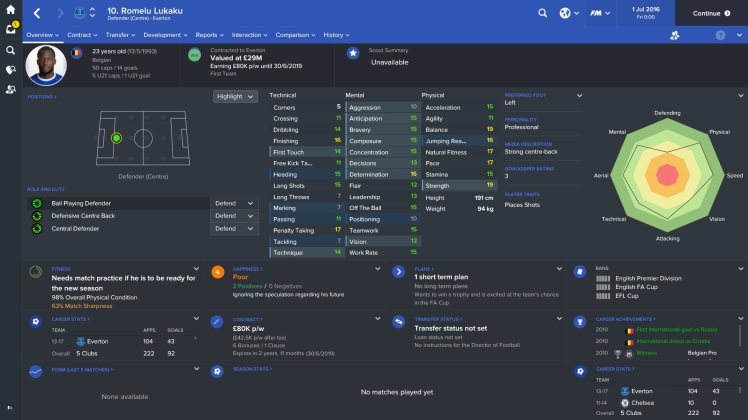 Romelu Lukaku is physically immense. All of his physical attributes (except Agility) are 15 or over. His strength will allow him to bully attackers and his pace will mean he can keep up with the quickest of strikers.

Clearly Diego Costa is the better centre-back in 2016, outperforming Lukaku in all areas. But Romelu has age on his side, can he use this to his advantage?

Let’s take a look to see how both players have progressed in their careers five years down the line.

Costa began his career in defence with Chelsea. In 3 and a half years with them he made 48 appearances in central defence, scoring 1 goal.

At 32 years of age it is clear the Costa is past his peak, and we can expect his attributes to decline from here. Having said this, for a 32-year-old his physicals are still on par with many 26 year olds.

As you can see, Costa has moved on from Chelsea and by 2021 he is part of the Juventus squad.

He actually left Chelsea in January 2020 to move to Barcelona before moving to Italy 1 year later.

With Chelsea, Costa won the UEFA Champions League twice. In 2018, he helped them beat Arsenal and in 2019 they beat Tottenham. Both of these wins lead to Club World Championship and UEFA Super Cup success the following season.

Chelsea also won the FA Cup twice with Costa in their ranks but failed to finish in the top two in the Premier League.

At Barcelona, Costa made 22 appearances in just over a year. He helped them to a Spanish Cup success and 2nd place in La Liga. He was then sold on to Juventus for £3.3M.

At his first season with Juventus they won Serie A, with Costa appearing in 17 league games since joining in the January transfer window.

Romelu Lukaku starts his career as a central defender with Everton. Will Everton be able to cope with his loss in attack?

No. Everton could not cope with Lukaku’s loss in attack. In 2017, Everton were relegated from the Premier League as Lukaku made 28 league appearances in central defence.

However their relegation did not put off clubs from making offers for the Belgian international. Man City bought him for £26M in July 2017.

Lukaku has gone on to win just one trophy with City so far, the Champions League in 2021. They beat their bitter rivals Manchester United to lift the trophy.

Lukaku has developed his defensive attributes nicely over the first five years of this experiment. It’s likely that we will now see a huge drop off from Costa as he approaches retirement.

Costa has returned to Spain after leaving Juventus in 2023. He’s opted for Malaga, a mid-table La Liga side. 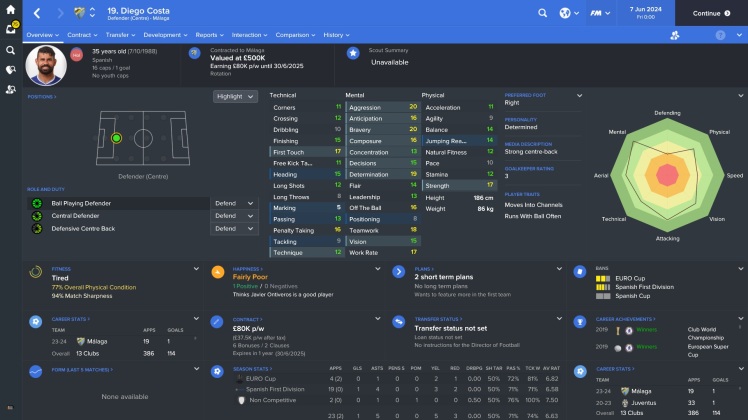 In his final years with Juventus he won two more Serie A titles and one Italian Cup.

After spending 7 years with Manchester City, Lukaku has moved on from the English side. A tempting offer of £9.75M came in from Chinese Super League side Jiangsu which was duly accepted. 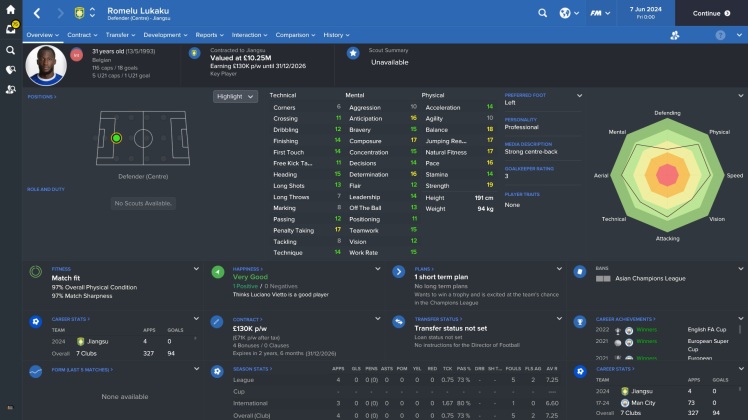 With a wage of £130K per week it is thought that Lukaku will look to see out his career with the Chinese club.

Costa did end his career with Malaga but failed to make enough of an impact in his short time at the club.

Diego Costa as a central-defender

Lukaku remained with Chinese club Jiangsu for 7 years in total, retiring in 2031.

With his Chinese club, he won the Chinese Super League twice, both titles being the first that Jiangsu had won in their history.

Romelu Lukaku as a central defender

Thanks for reading our latest Football Manager 2017 experiment. I hope you enjoyed seeing how these two explosive strikers performed as central defenders.

Please feel free to leave your thoughts on this post in the comments below. I’d like to know if the experiment panned out as you expected!