Alejandro Hurtado is in a nightmare that he cannot wake up from. After arriving in Colombia a Chilean hero, a Union San Felipe title-winning legend, Hurtado has regressed back into the manager we saw in the Deportes Puerto Montt days.

Back in 2016, Hurtado joined Chilean side Puerto Montt, only to go on and get sacked after just 19 matches. Hurtado has yet to be sacked from his role at Deportes Tolima in Colombia, but the end appears to be nigh. 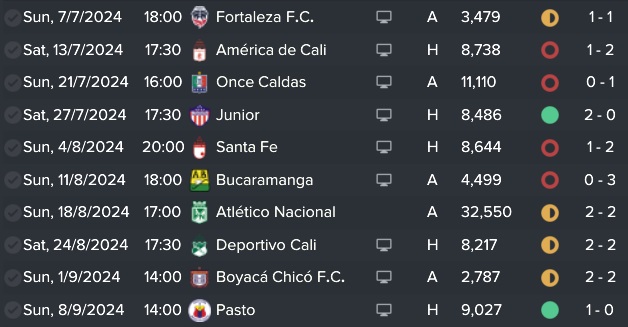 Two wins from the first ten games saw Hurtado’s Tolima slump to 15th place. No real players stood out as having performed well, with Nelson Angulo (who was once compared to Chilean hero Juan Jeraldino) drastically under-performing.

We lost to Junior in the 2nd Round of the Colombian Cup, losing 3-1 over two legs. This is a competition that I believe we will have a good chance of winning over the next couple of years and we’ll be looking to do so as soon as possible.

Unfortunately this year we just haven’t settled as a team to be able to push aside the bigger teams.

After 17 matches we sat in 17th place in the league.

Personally, I thought that our squad should have been good enough to challenge for 8th position. However our players under-performed and lacked the determination to turn draws into wins.

After the Cucuta Deportivo match, in which we lost 4-1, the board called Alejandro in for a meeting.

In this meeting Alejandro Hurtado was talked into agreeing a ten point target from the next five matches.

Incredibly, Tolima went onto win three games back-to-back. This ended our season on a high, but also meant that at the beginning of next season we’d still need 1 point from our opening two games to secure our job status.

I believe that this Deportes Tolima side could be the team that we eventually complete Colombia with. And for this reason I would prefer to stay with them.

But with the points target looming over us, we don’t want to prepare for an entire season with Tolima only to lose our first two matches and be fired.

Hurtado will be looking for a job over the winter period, but should no opportunities arise we’ll be staying with our Tolima team. Our nightmare start is yet to end, but there is definitely a light at the end of the tunnel.